The City of Richmond has hired Mr. Lucky Narain, for the part-time position as special investigator for the Richmond Citizens Police Review Commission. Relatively unknown to the Richmond community, Mr. Narian was a candidate for Oakland School Board in 2016, when he listed his occupation as “Military Lawyer.” Narain’s first assignment, we understand, will be a full and independent investigation of the police shooting of Richard “Pedie" Perez III, shot and killed by Richmond Police Officer Wallace Jensen just minutes after midnight on September 14, 2014,

The shooting—and subsequent efforts by the Richmond Police Chief Chris Magnus and Contra Costa County District Attorney Mark A. Peterson to justify the shooting and blame Pedie for being shot—have raised serious concerns within the Richmond community, concerns which led to changes in the City code on the police commission and the hiring of a Special Investigator.

In February 2016, responding to public concern following exposure of law enforcement’s cover-up in the shooting of Perez, the Richmond City Council voted 4-3 to instruct the police commission to hire an independent investigator not connected to the police department to investigate the Perez murder.

At the same time, the name of the Richmond Police commission was changed to “Richmond Citizens Police Review Commission.” The City Council also voted to require the Police Commission to automatically investigate any future police shootings and/or use of physical force resulting in serious injuries.

These accomplishments result from the efforts of the Perez family with the support of the Oscar Grant Committee (OGC) and the Richmond Progressive Alliance (RPA) to bring this miscarriage of justice to the attention of the people of Richmond and the Bay Area. Members of the Perez family and OGC have been active in raising Justice4Pedie issues in a variety of venues, including the May Day celebration of the ILWU, which included “Stop Police Terror” as one of its demands.

In another development earlier in May 2017, DA Peterson, who played a key role in the cover-up of Pedie’s killing, was accused of “willful or corrupt misconduct” by a Contra Costa grand jury that recommended that he be fired.

These impressive accomplishments do not mean we can rest on our laurels. We must continue our vigilance to make sure that those who led the earlier cover-up do not attempt to influence the course and conclusions of this special investigation. Special Investigator Narian owes his job and allegiance to the community, rather than to city officials and the politicians.

To this end, members of the OGC and the Perez family are organizing a special community meeting to review this case and discuss how we can ensure justice is done. Here’s the info:

Download the DRAFT flyer (PDF) for this event, put together by members of the Oscar Grant Committee and the Perez family.

The Justice 4 Mario Woods Coalition is taking our demands to District Attorney George Gascon. Bring a friend(s) and meet us at the rally! We'll see you at 850 Bryant Street on Friday, October 7th at 12:00 pm. 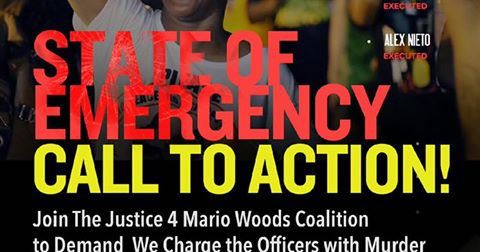 There will be a court hearing of some sort for Omar Shakir on October 4th at 9 AM at Department 7 of the René C. Davidson Courthouse, 1225 Fallon St, Oakland, CA. Omar Shakir is brother who was arrested during a pre-dawn paramilitary OPD raid for an assault on a police officer that the cops KNOW Mr. Shakir did not commit. People are encourage to attend to show support and encourage the prosecutor to drop the charges. You can read more about this travesty here: 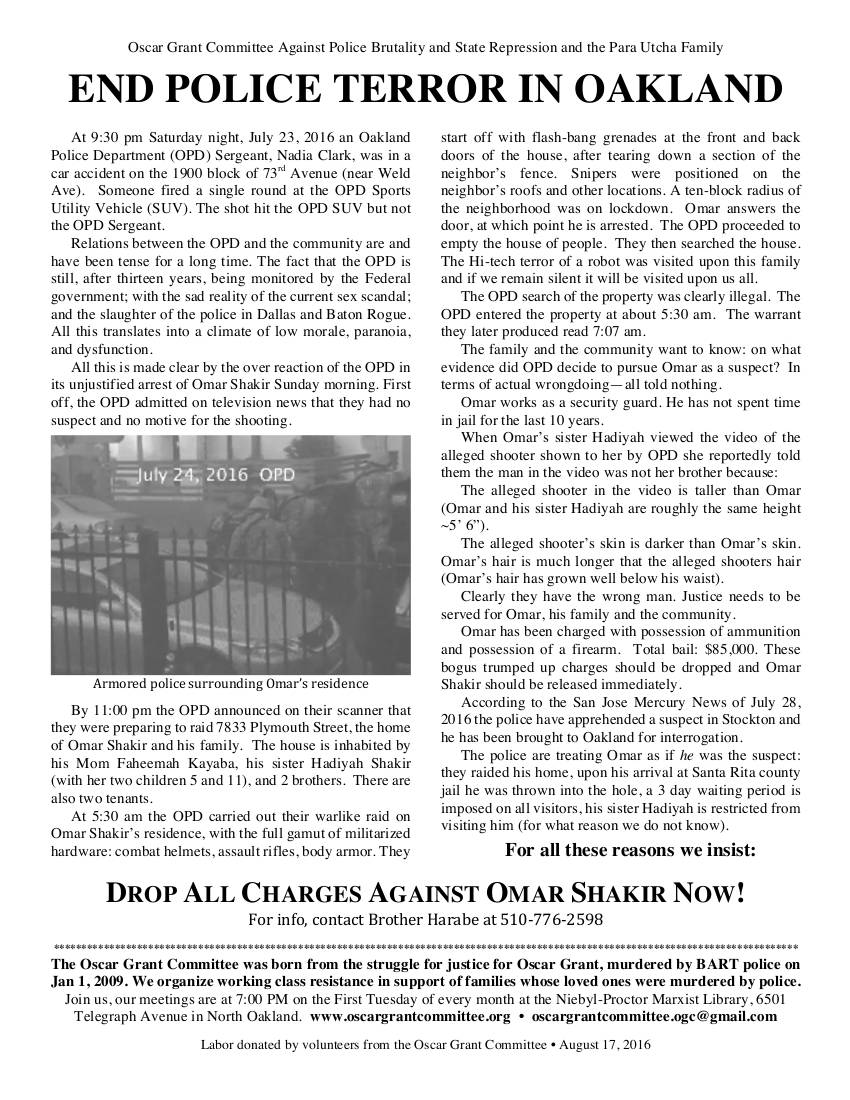 You’re invited to the march on Monday to #ReclaimMLK, which also launches #120Hours of direct actions of protest and resistance leading up to the January 20th inauguration of Donald Trump. March will start at Oscar Grant Plaza, 14th and Broadway, Oakland.

This year, we will begin our week of action with the Reclaiming King’s Radical Legacy March. We will then launch into 120 hours of autonomous direct action in resistance to the fascist Trump agenda. This year we are focused on immigrant rights, protection of our Muslim brothers and sisters, womens reproductive rights, loving our LGBTQ sisters, brothers and siblings, and the defense of Black life.
“True peace is not merely the absence of tension: it is the presence of justice.” – Rev. Martin Luther King, Jr.


The Oscar Grant Committee will meet at the Burger King at 13th & Broadway at 10:30 to assemble and divy up leaflets & signs. Then tey will join the Labor Contingent at 16th & Clay (State Building).
After the march folks will meet up at Pacific Coast Brewery at 907 Washington Street to reflect on the action and relax at bit

Below are the details of some of the actions:


The Women’s March is a national movement to unite everyone who stands for human rights, civil liberties, and social justice. There will be marches in D.C. and around the country, including in Oakland, San Francisco, and San Jose and other communities/towns/cities in the Bay Area.

The march represents the protection of our rights, our safety, our health, and our families — recognizing that our vibrant and diverse communities are the strength of our country.


On December 9, 2016 it will be 35 years since the police tried to execute Mumia Abu-Jamal, a former Black Panther and revolutionary journalist, the “voice of the voiceless.” Unable to kill him, the cops, courts and politicians conspired to frame him and sentence him to death for a crime he didn’t commit. Actions on this date will happen worldwide, and Oakland  will be part of these protests!


It took an international mass mobilization to prevent his execution. Now, it is taking protest and publicity to keep him alive in prison and to get him effective treatment for his Hepatitis C, which he is still being denied by the Pennsylvania prison system. We need to act!

Join us for a National Day of Action on December 9 to FREE MUMIA NOW!
and Demand: FREE HEP-C MEDS FOR ALL PRISONERS!
in coordination with his Philadelphia and New York supporters
Mumia Abu-Jamal, a former Black Panther who police tried to execute on the streets of Philadelphia in 1981, was framed by a racist judicial system and sentenced to death. Like other Black Panthers he was an innocent target of the FBI's repressive COINTELPRO campaign. From death row Mumia, became known as the "voice of the voiceless", exposing deplorable prison conditions and fighting racist police killings, imperialist wars and capitalist oppression. International protests got him off death row, but now they are trying to kill him by medical neglect. They are withholding life-saving Hep C medication he and 7,000 other Pennsylvania prisoners desperately need. After 35 years in prison, mostly in solitary confinement, it's time to mobilize to FREE MUMIA and other political prisoners like him now!
A recent US Supreme Court decision, "Williams vs. Pennsylvania" could open the door for Mumia's freedom but only if this fundamentally racist judicial system is confronted with mass protests like those that got him off death row. This decision ruled that a prosecutor cannot later sit as judge over the same defendant's appeal. This is exactly what happened in Mumia's case. On this basis Mumia's attorneys have filed a new legal action. If successful, the Pennsylvania Supreme Court rulings that upheld his conviction would be overturned. Mumia could then re-appeal the issues of his innocence, jury bias and falsified evidence to win an outright dismissal of charges or get a new trial. Mumia was framed by corrupt cops, prosecutors, and judges for the murder of a policeman that he did not commit!
We say: Free Mumia Now!
Endorsers for the December 9th Free Mumia Coalition:
Angela Davis; ANSWER Coalition; Anti Police-Terror Project; BAMN; Black Panther Commemoration Committee, NY; (Former) Black Panthers: Cleo Silvers, Eddie Conway, Larry Pinkney, William Johnson; Cal BSU; Code Pink, Freedom Socialist Party-Bay Area; Haiti Action Committee; International Action Center; John Brown Society; Justice for Palestinians-San Jose; Labor Action Committee to Free Mumia Abu-Jamal; Love Not Blood Campaign/Uncle Bobby; National Alumni Association of the Black Panther Party; Oakland Socialist Group; Oakland Teachers for Mumia; Oasis Hepatitis C Clinic; Occupy 4 Prisoners; Oscar Grant Committee Against Police Brutality and State Repression; Party for Socialism and Liberation; Peace and Freedom Party; Socialist Organizer; Socialist Viewpoint; Speak Out Now; Veterans for Peace - East Bay; Workers World Party
See you at Oscar Grant Plaza (City Hall), Oakland, 4 pm December 9th
More Info: Tova, 510-600-5800; Jack, 510-501-7080; Gerald 510-417-1252

Click on the flyer below to get the PDF for the action. 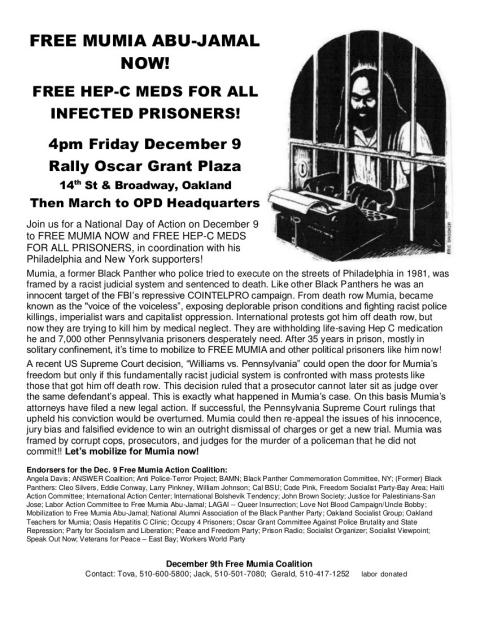