On June 6, 2015 Oakland Police Officer Nicole Rhodes shot Demouria Hogg to death. Hogg had been unconscious behind the wheel of a BMW that, according to San Francisco police, had been involved in a robbery and a chase there the night before. Firefighters had reported seeing a firearm in the passenger's seat, and police tried for an hour to rouse Hogg with loudspeakers, beanbag rounds, and by breaking the car's windows. Finally they sent one officer in to grab the gun while Officer Rhodes provided covering fire through the windshield. Although she said she couldn't see Hogg clearly, she also said that she saw him reach over to the passenger's seat where the gun was still sitting. Rhodes fired two shots at Hogg, killing him (another officer fired a taser at about the same time).

The Community Response Team of the Anti Police-Terror Project interviewed 15 witnesses to the police action; read or watched media reports; listened to publicly-posted recordings of police, sheriff's, and fire department radio chatter during the operation; analyzed bystanders' photos and video of the scene; and discussed the case with an officer from another jurisdiction. A slightly edited version of the report is here.

Propaganda War in Baltimore: Some Commercial Media Waking Up!

People of color and veteran activists know that murders and cover-ups by police are nothing new. What's new is the recording equipment that enables us to document them, and the Internet, which enables us to publish this evidence.

After the video of Officer Slager gunning down Walter Scott as he was running away surfaced, Adam Johnson of Fairness & Accuracy In Media wrote, "most of the local press," by simply repeating what police said, "amplified a storyline that, in retrospect, was entirely made up." Even NBC News published a mock report based on "official sources," observing that these were the only known sources before the video came out.

The police department in Baltimore has been quick to tweet about "violence," "looting," and "bottles and bricks being thrown at officers;" a local teacher tweeted her experience ("police were forcing busses to stop and unload all their passengers," students "were trying to leave on various busses but couldn't," cops "in full riot gear marching toward any small social clique of students." This video shows cops throwing things back at protesters, and WBAL TV in Baltimore interviewed gang members.
Stop "Urban Shield" rally, Oakland 9/11/15 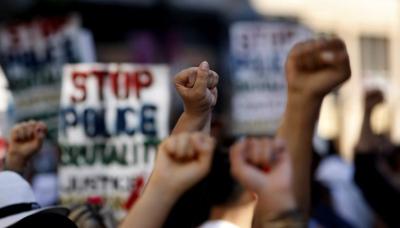 Jack Heyman: May Day march at Port of Oakland to protest police killings

The Rev. Dr. Martin Luther King, Jr. Was Murdered By the State

Every year on Martin Luther King day we hear the same thing: “I have a dream....” It's a beautiful speech, a moving speech, a speech that reminds us how much we want human solidarity that's bigger and deeper than our shades of skin. But the Rev. Dr. King's vision and activism were bigger and deeper than racial harmony, and there's a lot more to his legacy – and his assassination – than the ruling class and their bought-and-paid-for media want us to know.

We all know the official story that James Earl Ray shot the Rev. Dr. King. But a 1999 civil trial verdict in Memphis found that agents of the City of Memphis, the State of Tennessee, and the U.S. Government conspired to assassinate him, contracting with the New Orleans Mafia to do the hit (a Military Intelligence shooter team was also there as a backup, but left without firing a shot). William F. Pepper, a lawyer who worked with King and brought the lawsuit on behalf of the King family, worked for over twenty-five years building the case. He collected sworn testimony from Special Forces soldiers who were there as well as from the man who hid the actual murder weapon, other witnesses, and the report of the House Select Committee on Assassinations.

King did not call for racial equality alone. He opposed the Vietnam war, calling the U.S. Government “the greatest purveyor of violence on earth.” He was organizing a national Poor Peoples' Campaign including a tent city of 500,000 in the shadow of the Washington Memorial. He called for a general strike in Memphis in solidarity with the sanitation workers. He even planned to run for President on an anti-war, anti-capitalist platform. Others were organizing for these ends as well. The ruling class was alarmed, and ramped up its surveillance and infiltration: the army put over 1500 plainclothes agents in “dissenting” organizations of all kinds, with King's Southern Christian Leadership Conference a high priority. The 902nd Military Intelligence Group began planning assassinations of key black leaders in 1963. Military Intelligence had been spying on King's family for three generations, and tasked three intelligence groups to infiltrate the Poor Peoples' Campaign. Big oilmen like Lyndon Johnson, H. L. Hunt, and Clint Murchison, along with their bankers and lawyers, would lose a lot of money if the war ended. Hunt and J. Edgar Hoover plotted to neutralize King's influence, with Hoover saying they must “completely silence” him. The intelligence agencies had a long-standing relationship with the Mafia, selling them guns stolen from National Guard armories for resale in Latin America, splitting the profits to fund covert operations.

One witness actually had King in his crosshairs at a march In Memphis, but King abruptly turned, spoiling the shot. The government had offered a contract to one Mafia family, but never struck a deal. Finally a Memphis man connected with Carlos Marcello's New Orleans Mafia took the contract and arranged the hit.

To avoid a trial, the government framed James Earl Ray and bullied him into taking a plea bargain. But Ray denied having shot King, and other witnesses corroborate this.

We honor the Rev. Dr. Martin Luther King not only as a great civil rights leader, but as a martyr for civil rights, workers, and peace-loving people everywhere, murdered by the covert capitalist state.

You can download the Motion, Declaration and the independent report on the October 25, 2011 raid on Occupy Oakland by the Oakland Police Department below: